The “Penelope and Odysseus” series is made up of seven episodes that take on the story of the heroic couple from a comical feminist perspective in a precious visual style. The films include:

In each film, the long-suffering heroine of the Odyssey is depicted as “the embodiment of calm and patient, gentle and forgiving femininity,” as she deals with different challenges typically faced by women in contemporary society — e.g., male prejudice, professional achievement, jealousy, the rigors of fashion, stress and the many demands on women’s time — though she always forgives Odysseus’ transgressions. The films treat these issues in a humorous way, often tinged with light irony and sarcasm, which is introduced by off-screen commentators (famous Romanian actors Toma Caragiu and Octavian Cotescu).

Part of the films’ humor also derives from the juxtaposition of elements of modern civilization, such as electric appliances, appearing in the ancient setting (a la The Flinstones). 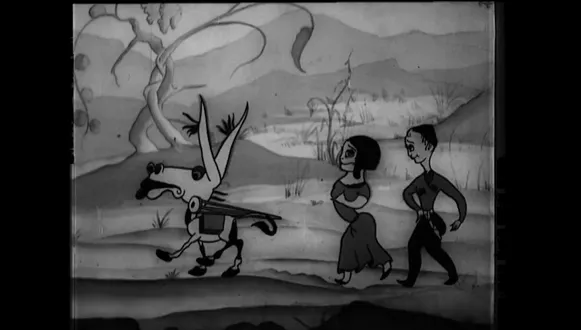 In 1936, after its incorporation into the USSR, the Republic of Georgia produced this short as its first animated film. The ten-minute film was not a straightforward retelling of Jason and Medea’s adventures in Colchis; rather, it deployed Jason as a symbol of the Soviet state’s “heroic” efforts to drain the region’s marshes and transform them into productive agricultural land. He promises Medea a garden, and undertakes to destroy the malarial mosquitoes and the cavalry of frogs that live in the area. Once he succeeds in this endeavor, he gives Medea the Golden Fleece and the two find seeds to plant fruit trees. The film appears to be the earliest animated treatment of Greek epic ever made in Russia.

From the DVD cover: “Hercules, Jupiter’s favourite son and his little friend cloppete, King Krinios’ centaur son, are on a journey to the city of a Hundred Centaurs…what starts out as a mere stroll develops into one of his most exciting adventures! The adventure is also tainted with the prospect of Hercules meeting his true love! However Hercules must face an assortment of deadly enemies on his quest such as the multi-headed sea monster and the ferocious lion. The story delivers a series of cliffhangers where our hero is led to the dark and dangerous depths of the realm of the Dead World.”

This exceptionally low-budget, Italian-produced film is an “unofficial remake” of the Disney feature, “with the addition of elements ripped from the sci-fi/fantasy series Masters of the Universe,” according to Martin Lindner (‘Mythology for the Young at Heart’, 2017).

45 min; Japanese; based on a shojo manga series by Rurika Fuyuki

This romance and fantasy-inspired OVA anime adapts the story of Hades and Persephone, giving it a modern twist. Middle school student Arisa Sakura starts a fortune-telling club at her school. Through her rivalry with another student, the astronomy club founder, she learns that many students at her school are actually Greek gods reincarnated who still possess great powers. This includes Arisa herself, who is a second incarnation of Persephone, though she does not recall her past life. It also includes Amano Sho, a classmate who is Hades reincarnated and with whom she is destined to fall in love all over again. Amano recalls Arisa’s tragic past life experience and he does not to lose her again. He therefore fights to protect her, in particular from Zeus, who wants access to the unique power she holds: the ability to revive the Titan.

The storyline is very similar to that of Sailor Moon and may have inspired it, though there is much more direct engagement with Greek mythology here. The real mystery is why it is titled Aries, since, as far as I can tell, he does not figure as a character in the film or the manga!

In this student-produced CGI short, Cupid is on the job in modern-day Paris, bringing couples together with his arrows of love. However, one assignment goes awry when he gets distracted and shoots a young man twice. This causes the man to turn into a modern Narcissus, who falls in love with himself in his own reflection. Cupid’s attempts to rectify this situation take up the bulk of the film, which ends with an almost wholly successful resolution to the mix-up.

An animated retelling of the classic tale of King Midas in puppet form. The film features no dialogue, only musical accompaniment (by Krzysztof Penderecki) and employs many ancient Greek and Minoan artistic motifs (especially the Snake Goddess figurine), though stylized to suit a 1960s aesthetic. In this regard, it is quite similar to Polish director Edward Sturlis’ “Orpheus and Eurydice [Orfeusz i Eurydyka]” from 1961. It also features the storyline originated by Nathaniel Hawthorne and represented in Ray Harryhausen’s 1953 animated version of the story, in which Midas has a daughter whom he turns to gold, but who then turns back to flesh and blood after the god Dionysus intervenes.

Swiss independent animator Georges Schwizgebel drew upon the story of Icarus and his fall in this film, the first he directed. The film’s unique pointillist aesthetic was created with “a black hole template laid over painted cels” (Bendazzi p. 198), which gives it a video-game like feel. The harpsichord musical accompaniment provides an element of gravitas to the playful animation, as it gives the impression that “the ‘bulbs’…are triggered by the harpsichord keys as they are played.”

This CGI-animated parody of a gladiator film was one of the biggest box office bombs in Italian cinema history. Produced by Rainbow SpA in Italy in 2012, it was released in the United States in 2014 by Paramount Pictures. The film, which was clearly inspired by Ridley Scott’s Gladiator (2000), was in development for five years, cost about $50 million dollars to produce and earned about $10 million in total.

It tells the story of Timo, an orphan from Pompeii who is adopted by a general named Chirone and raised in a gladiatorial school in ancient Rome. Chirone is keen to train Timo in the gladiatorial arts, but Timo just wants to hang out with his friends, until he falls in love with Lucilla, Chirone’s daughter who has returned to Rome from Greece. Then, “through spells, crazy raids in the woods and the terrible trainings of a very personal lady trainer named Diana, Timo…transforms himself into the greatest gladiator of all time” and is able to outbattle Cassio, his rival for Lucilla’s love, in the arena.

The animation has a somewhat creepy aesthetic and the plot of the underdog-who-beats-the-odds is familiar to anyone who has ever watched a film from the 1980s (see Karate Kid, Rocky, etc.), but perhaps what is most disturbing about it is its extreme sanitization of the bloodsport of the arena for youthful audiences. Also the emperor Domitian makes an appearance?

HBO aired “The Animated Odyssey” as a four-part miniseries in the US in 2000. It was originally produced by Vilanima Studios of Lithuania and first aired in Russia as a feature-length film in 1998 under the title The Destruction of Troy and the Adventures of Odysseus (Разрушение Трои и путешествие Одиссея). As a series it was divided into half-hour episodes including “The Trojan Horse,” “The Cyclops,” “Circe, Hades and the Sirens,” and “Odysseus Returns.”

The production, which was supervised by original Star Wars producer Gary Kurtz and took three years to complete, was lavish and ambitious, and was intended to appeal to a wide audience that included school-age children and young adults. The narrative presented was more detailed than other animated treatments of the Odyssey and stayed closer to traditional storyline. It also included a powerful score by the Lithuanian State Symphony Orchestra, though some critics thought that the film was lacking in dynamism, due to its stilted and choppy character movement and awkward dialogue (likely due to its translation from Russian and dubbing into English). The English-dubbed version of the film is nowhere to be found online or streaming, only the Russian version and a modern Greek version are available.

Start a Blog at WordPress.com.